Sabah wildlife officials have announced that Iman, the last female Sumatran rhinoceros, is seriously ill.   Living in a forest reserve in Lahad Datu, she has been bleeding from multiple tumors in her uterine for three days now.  They believe that the larger tumors must have ruptured, thus, the pain and the bleeding.  According to Sabah Wildlife Department director Augustine Tuuga, medicines and supplements can usually treat the bleeding but now, Iman has not left her mud wallow and does not want anybody to come near her.  Furthermore, she has not eaten much.  Iman was a wild rhino when captured in Danum Valley in March 2014.  She still produced eggs even in her condition with severe fibroids in her uterus.  These eggs were used for in-vitro fertilization.

The Borneo Rhino Alliance veterinarians are also with Iman’s keepers in monitoring her situation.  Mr. Augustine assured the public that there will be regular updates on her condition.  He also added that Iman’s condition came as sad news for the department, which is just recovering from the demise of Puntung, also a female Sumatran rhino at the reserve.

Puntung had a dental surgery conducted by a multinational team in Lahad Datu last May because of a swelling on her left cheek due to an infected tooth root.  Biopsies later revealed that the cause was skin cancer.  She was put to sleep a month later.

In the latest count of the World Wide Fund for Nature (WWF), less than 100 Sumatran rhinos exist around the world today.

High Court Judge Ravinthran Paramaguru, representing the Chief Justice, said that the project aims to bring about awareness and respect for the environment and to leave a legacy for the Sabah’s future generations.

Although the project targeted one million trees, Deputy Registrar and program coordinator Elsie Primus said that a total of 1.7 million trees were planted due to the participation of other companies that wanted to contribute their own tree planting programs.  There were also schools that participated in the tree planting competition.

Indonesian Singer Fandy Santoso was very satisfied with his first Sabah experience.  Invited to perform during the Kota Kinabalu Christmas celebration recently, he said that it was a new place and environment for him.  Having time before his performance, he took a walk around the city and noticed a difference between the two places.  Although the food is somewhat similar, life in Kota Kinabalu is more organized.

He said that most people in his country are Muslims and public display of Christmas celebrations are very rare there.  He further commented that religious tolerance in Sabah is a plus.

Fandy rose to fame when he landed in the top five slots in Indonesian Idol 2007 and became the lead vocalist for the band Kerispatih in 2010.  For all these blessings in his life, he is very thankful to God.

Grandis Plans to Have 5-Star Resort in KK 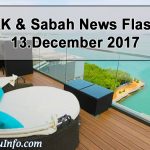 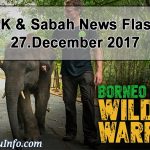