If one has an hour or two to spend in the afternoon, a walk to the Atkinson Clock Tower is worth the time. It is a pre-war architecture situated on a bluff along signal hill road near the old police station.

The area around the clock might not be inspiring but if walking up to the stairs next to the clock, a lead to a higher road can be found which leads, to some really good views across the valley. 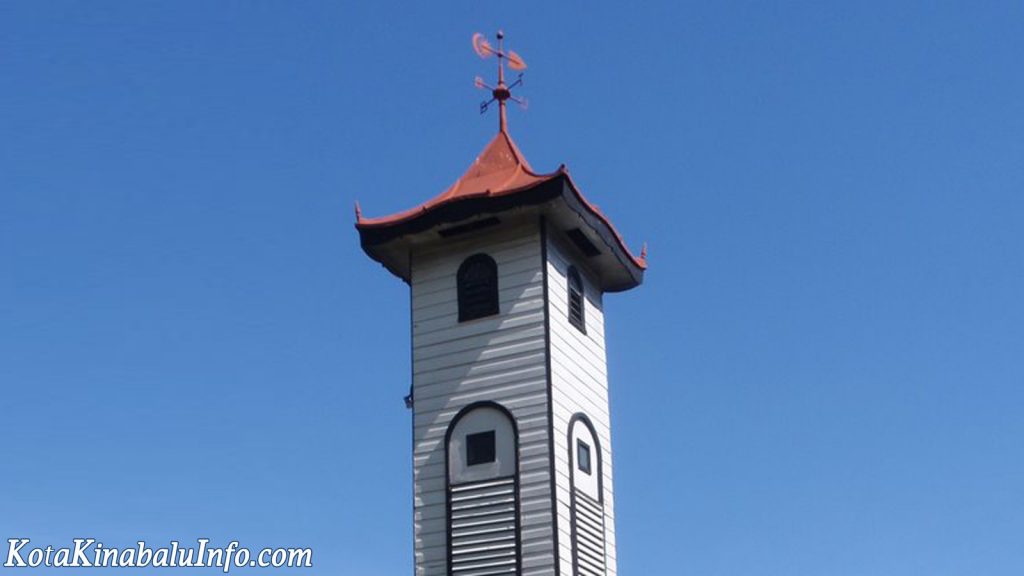 History of the Atkinson Clock Tower

The tower was built in 1905 by ‘Mary Edith Atkinson’ in the memory of her son ‘Francis George Atkinson’, the first district officer of Jesselton who died of ‘Borneo Fever’(malaria) at the age of 28. Atkinson clock tower is the oldest standing structure in Sabah, surviving the allied bombing of Jesselton during the Second World War.

In 1950, the Radio Sabah’s Broadcasting Department was located near the clock tower. People used to hear the chimes of tower over the radio before the BBC World News broadcast.

The dial and the cog of the clock were damaged during the war. It was repaired by ‘Lick Ming Watch Dealers’ of Kota Kinabalu, who have continued to be the maintenance contractors until today.

It is an all wood-no nail structure. The entire tower is made up of Mirabau wood. The construction of the tower was financed by Atkinson’s friends and most probably built with additional funds challenged from shipwright of visiting naval vessels.

It is a 50 feet high * 6’3” * 6’3” square tower. A weather vane with initials of the wind direction adds a few more inches to the height of this elegant monument.

The tower was illuminated at night and was used as a shipping landmark right up to the 1950 by local ships heading to Jesselton Port. Today, clock tower has been obscured by other taller buildings all around it.

Getting to the Atkinson Clock Tower

The clock tower is located behind the police centre on Jalan Dewan. One can either walk down to it or take a taxi from the bottom of Signal Hill road at Padang Merdeka, and then turn left to get to the clock tower site.